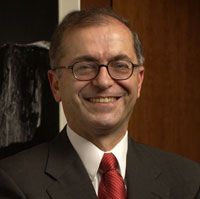 Dr. Charles Elachi is Professor (Emeritus) of Electrical Engineering and Planetary Science at the California Institute of Technology.  From 2001 to 2016 he was the Director of the Jet Propulsion Laboratory and Vice President of California Institute of Technology.  During his 15-year tenure, he oversaw the development and operations of over 45 flight missions and instruments.

He has been a principal investigator on a number of NASA-sponsored studies and flight projects including the Shuttle Imaging Radar series (Science Team Leader), the Magellan Imaging Radar (Team Member), the Cassini Titan Radar (Team Leader) and a Co-Investigator on the Europa Sounding Radar.  He is the author of over 230 publications in the fields of active microwave remote sensing and electromagnetic theory, and he holds several patents in those fields.

In 1988 the L.A. Times selected him as one of "Southern California's rising stars who will make a difference in L.A."

In 1989 Asteroid 1982 SU was renamed 4116 Elachi in recognition of his contribution to planetary exploration.