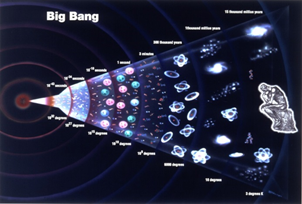 The early universe is the only laboratory where the ideas of fundamental physics at the highest energies can be tested. It provides us with energies a trillion times greater than the energies reached by the Large Hadron Collider (LHC).

It is now a widely accepted hypothesis that the universe started in a hot big bang, about 13.7 billion years ago, where the universe was extremely hot and dense.

As the universe began to cool, protons and neutrons began to form. Then, slowly over time, these protons, neutrons and electrons came together to form hydrogen and small amounts of helium. During the billions of years that followed, stars, planets and galaxies formed to create the universe as we see it today.

CFP research in this field includes: 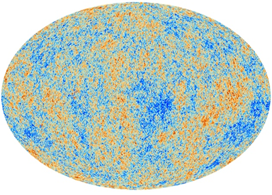 The standard big bang cosmological model, despite its great successes, has some long-standing shortcomings.

In the 1970s it was proposed that the early universe came through the stage of inflation, where the universe expanded very rapidly and its size scale increased by a factor of 1050. This phase transition is thought to have happened between 10-35 to 10-32 seconds after the big bang. Then the universe settled down into the standard big bang evolution.

Vacuum-like state in inflation theory is associated with a scalar field, which is called an inflation field. At CFP we study the hybrid inflationary in supersymmetric theories in light of new measurements by the Planck satellite.

The CFP team is working on one of the big unsolved scientific enigmas: do dark matter and dark energy exist? Dark matter and energy do not absorb, reflect or emit light. They are currently revealed only through their gravitational effects on visible matter.

The recent observations by the Planck satellite have pointed out that the universe is made up of 4.9 percent atoms, the building blocks of stars and planets, about 26.8 percent dark matter and about 68.3 percent dark energy, which acts as a sort of anti-gravity. This energy, distinct from dark matter, is responsible for the present-day acceleration of the universal expansion. 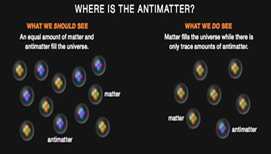 There is matter and antimatter in the present universe. The ratio of baryon to photon is of the order of 10-10, although in the early universe, due to the creation and annihilation of quark-antiquark pairs, their number densities were of the same order.

Baryogenesis is the process of generating an asymmetry between baryons and antibaryons in the course of the cosmological evolution. Three conditions are needed to account for this asymmetry: charge conjugate and parity violation, baryon number violation and out-of-equilibrium.