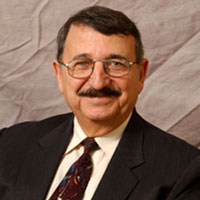 Mostafa El-Sayed is the Julius Brown Chair and Regents’ Professor and Director of the Laser Dynamics Laboratory at the Georgia Institute of Technology in the U.S.

He received his B.Sc. degree at Ain Shams University, Cairo, Egypt and his Ph.D. at Florida State University. He was a Research Associate at Yale, Harvard and the California Institute of Technology. He was a Faculty member at the department of chemistry and biochemistry at UCLA until 1994 when he moved to Georgia Tech as the Julius Brown Chair and Regents’ Professor.

He was the Editor-in-Chief of the Journal of Physical Chemistry for a quarter of a century. He has served on the advisory boards of NSF, the DOE–BESAC and on a number of the DOE Nano-Centers in the United States. He was on the selection committee of the Kavli Prize of Nano-Science and now is a member of the President’s International Advisory Council of KAUST.

He received the King Faisal International Prize in the Sciences and a number of honorary Doctoral Degrees from several Middle Eastern Universities like Mansura University, the University of Alexandria Medical School, Beni-Suef University, and the American University of Beirut. He has received a number of American national awards. He was a von Humboldt senior fellow in Germany, the Fairchild Professor at the California Institute of Technology, and visiting Miller Professor at UC Berkley. El-Sayed received the 2007 US National Medal of Sciences from the President of the United States in 2008 and in 2009 he received the Medal of the Egyptian Republic of the First Class.