‘From Egypt to America: Caltech, the Nobel Prize, and Zewail City’: An Article by Dr. Ahmed Zewail 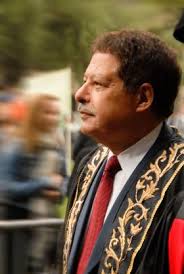 Growing up in Egypt, how did a boy who never heard of the significance of Caltech or the Nobel Prize—although first in his class in an extraordinary education system—reach the apex of scientific recognition, the Nobel Prize honor, and extend his passion for helping the “have-nots” and succeeding, after 15 years of bureaucratic impediment, in building a first-rate institution that became Egypt’s National Project, the Zewail City of Science and Technology?

In August of 1969 I arrived in the U.S., around the time of the moon landing by Neil Armstrong. American innovation was superior to all other nations and received the lion’s share of Nobel prizes. But my goals were limited to obtaining a Ph.D. from the University of Pennsylvania, finishing a post-doctoral fellowship, and buying a big American car, all to return to Egypt for the reserved position I had at the University of Alexandria. However, the offer of an assistant professorship position at Caltech changed my life.

It is true that I came from a land of civilization, which spawned the Alexandria Library and Musaeum (University). I received my undergraduate education at the University of Alexandria, my birth place (Damanhur) was only 60 km to Alexandria, and I lived in a city (Desuq) with close proximity to where the Rosetta Stone was discovered. Both Jean-François Champollion and Thomas Young, a physicist and linguist, were in a race for the discovery. Egypt had also been home to the first university in the “modern world,” Al-Azhar, which was established in 970-972 CE, and Cairo University, which was established a century ago.

My education in the 1960s reflected these traditions and indeed was superb. But in the last 50 years, deterioration in education and R&D took place because of negligence by high-level administration, and today Egypt’s ranking among nations is not in the top 100, according to the UN. Yet Egypt, with its population of 90M and more than one-third in the youth category, should be a leader in the region. Upon arrival at Caltech as an assistant professor, I dreamt of having a similar institution in Egypt, but I had to first begin the R&D that I love. At the time, I was not involved in international affairs and would not have been taken seriously by world leaders.

At Caltech, there was extraordinary power of intellect evident in the presence on campus of its Nobel Laureates: Richard Feynman, Murray Gell-Mann, Roger Sperry, Carl Anderson, and more. For example, Maarten Schmidt discovered quasars, the Richter scale was invented here, and the age of the earth (4.5 billion years) was determined here by Clair Patterson. Adding to my intimidation was the illustrious list of Caltech graduates, such as Gordon Moore, William Shockley, Charles Townes, and Linus Pauling. All of these achievements are unique to an Institution with 300 faculty and were involved in my decision to join the faculty at Caltech over other places I received offers from, such as Harvard, Chicago, Rice, and Northwestern. 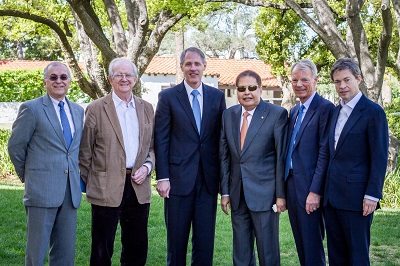 On February 26, 2016, Caltech celebrated my 40-year contribution to science and world affairs; and my 70th birthday coincided with the event! President Tom Rosenbaum and I thought the conference should be titled, “Science and Society.” This is because after I received the Nobel Prize in 1999, I became also extensively involved in world affairs. At the Caltech conference, five Nobel Laureates were present (David Baltimore, Roger Kornberg, William Phillips, A. Michael Spence, and me) and prominent scientists (Jeff Kimble and Charles Elachi) were among the speakers who told us about future frontiers of science, space, economics, and other topics.

The two leading personalities in the morning and afternoon sessions (Peter Dervan and Nathan Gardels) introduced speakers and gave overview remarks. More than 1200 people attended the conference and the introductory remarks by the President, Provost, and Division Chairs were all in relation to my strong bond to Caltech, the R&D we achieved with my group, and the genuine interest in global affairs. In the inspirational analogy with Benjamin Franklin and Linus Pauling, the Provost presented me with the only book written by Franklin on his role as a scientist and statesman, and signed by Caltech Presidents (Harold Brown, Thomas Everhart, David Baltimore, Jean-Lou Chameau, and Thomas Rosenbaum).

I began the opening session by giving a talk titled, “Caltech: A Personal Perspective.” In it I explored how an assistant professor at Caltech, in his first 10 years there, could carry out the research with his group that was recognized by a two-year tenure and a Nobel Prize? I also presented how, in the post-Nobel era, we were able to develop a new field dubbed 4D Electron Microscopy. In the Nobel-recognized development, we were able to increase the time resolution to a millionth of a billionth of a second (femtosecond) to record atomic-scale events in time: this research was funded by Caltech and the Federal government. 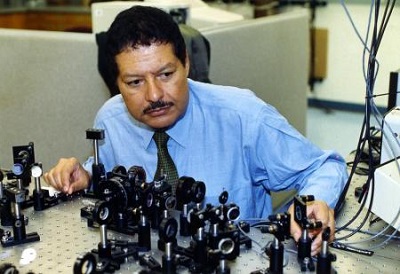 In the post-Nobel development, we were able to transform resolutions in both space and time, to enable the visualization of structures in space (nanometer or less) and in time (femtosecond, and potentially the attosecond): this research was funded by Caltech and the Federal government, but the key instruments were generously supported by the Moore Foundation.

I then gave a review of my world affairs activities: President Obama’s Council of Advisors on Science and Technology; President Al-Sisi’s Council of Advisors; and Secretary General of the UN, Mr. Ban Ki-moon’s, Advisors on Science and Technology. I was also the first Science Envoy to the Middle East. But perhaps the task that was most challenging and rewarding, if successful, is the establishment of Zewail City in Egypt, with the hope of becoming the Caltech of the Middle East.

One has to ask, and I did, what made Caltech such a unique place, and how one becomes a “citizen of the world?” On the science front, the answer became clear with time. “Caltech’s Coordinates” are three: The sky is the limit; curiosity-driven research is appreciated; and the intellectual and technical support, in my view, is abundant. That feeling of the sky being the limit comes from the atmosphere established by the administration and goes back to the wisdom of Robert Millikan who was the first Chairman of the Executive Council. Curiosity-driven research is a tradition at Caltech, and I was never asked to justify why I was working in areas of no immediate relevance: the Federal government, however, does ask!

Remarkably, our current Provost meets with the Caltech faculty yearly over lunch or coffee to learn about their research and needs. Also, Caltech receives the best graduate students and researchers and this is essential for carrying out frontier research. Because our colleagues and faculty are world-renowned, I benefitted from the broad intellectual richness on campus. So, for example, I can lunch with David Baltimore to learn about viruses, or Peter Dervan to listen to his view on transient intermediates in chemical reactions, or Jeff Kimble to exchange ideas on photon-matter interactions. Caltech is continuing these traditions and it is enough to see that in this month’s announcements of gravitational waves and a new planet—the so-called Planet Nine.

On the world affairs front the challenges are huge but the rewards, especially for the “have-nots,” are enormous. Having been a scientific advisor to three of today’s most powerful leaders is indeed satisfying because of the mission and goals: helping to advance education, scientific research, and peace. However, building a modern science base in Egypt is work on the ground that requires patience, persistence, and influence. The goal is to have Egypt participate in the “knowledge-economy” of the world and acquire a new status in R&D and education with pride that, in my view, will facilitate the peace process in the Middle East. 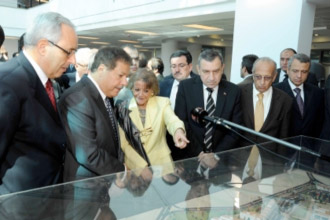 The concept of the Zewail City project was outlined in 1999 to the then-president of the republic, Mr. Mubarak, but owing to political reasons, implementation was halted. After the revolution of January 2011, the project was revived and the Egyptian government decreed its establishment as the national project for scientific renaissance, naming it Zewail City of Science and Technology. The City was inaugurated in November 2011 on a campus on the outskirts of Cairo.

The project is unique in several respects. First, in an unprecedented way—certainly in Egypt—the City is supported by donations from the Egyptian people and from the government. The president has ordered the Army’s Engineering Authority to be responsible for the construction of the new campus on 200 acres. Second, the City has its own special law, granted in 2012, which allows for independent governance by the board of trustees. Third, the City comprises three interactive substructures: the university, the research institutes and the technology pyramid, designed to enable world-class education, scientific research and industrial impact. As mentioned earlier, the goal is to build a modern science base with an advanced industry sector but, as importantly, to limit the brain drain in these advanced fields of science and engineering.

The prime purpose of the university is to attract talented students from all over the country and to offer them unique academic curricula that are tailored to provide knowledge in cutting-edge fields of science and engineering. The new concept here is the departure from traditional departments with walls separating the disciplines. Rather, all students have the opportunity to learn in a multidisciplinary, or transdisciplinary, system. In its first year of operation, 6,000 students applied for admission and 300 were admitted—a 5% admission rate that is on par with Harvard and Yale.

The second branch of the City, the research institutes, houses centers in fields at the forefront of science and engineering. Priority is given to research particularly pertinent to national needs. The scope of research is broad, from biomedical sciences, which are important for alleviating diseases in the region, to R&D in areas such as solar energy (an alternative source abundant in Egypt). At present, we have seven centers of research in fundamental physics, materials science, nanotechnology, imaging and biomedical sciences, among others. The last substructure is the technology pyramid, whose purpose is to transfer the output of the research institutes to industrial applications, to initiate incubators and spin-off companies, and to attract major international corporations. 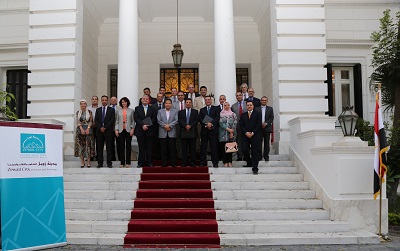 Egypt was and still is the leader of the Arab world. Its next revolution in education and culture will trigger major changes in other Arab countries. Even though this leadership role has slipped over the past three decades during Mubarak's reign, Egypt still has the history and the foundation, not to mention the population and institutions, to regain the avant-garde force of the necessary transformation. The hope is that the political awakening already in motion in the region will support a successful 'science spring' that sweeps the Middle East and enables the building of a knowledge society. Knowledge acquisition is a concept that is woven into the fabric of Islam and was the springboard of success of its empire centuries ago. But to regain prominence in today's world, that concept must re-emerge, transforming the culture in ways necessary for the charting of a new and promising future, and that is a prime goal of Zewail City.

In my life so far, I have been fortunate to be at Caltech for 40 years, to achieve the highest in science with my research group, and to enable the establishment of new institutions of higher learning in Egypt.