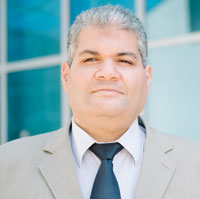 Cairo, 8 October - Salah Obayya, Ph.D., Professor of Photonics and Director of the Center for Photonics and Smart Materials (CPSM) at Zewail City of Science and Technology has received the State Award for Academic Excellence in Engineering Sciences. Obayya has been awarded for his work published in one of the most cited international journals: Institute of Electrical and Electronic Engineers (IEEE) journal.

“This award is not only the highest on the scientific level, it has a significant financial value of 100 thousand Egyptian pounds from the state,” commented Dr Ahmed Zewail, Chairman of the Supreme Advisory Board of Zewail City in a word addressed to Obayya during the awarding ceremony held at the City. “The award is for Professor Obayya and his research team as no scientist works alone, I wish to congratulate them all,” said Zewail.

Obayya joined Zewail City following his position as full professor of photonics and Head of the Nanophotonics Research Centre at the University of Glamorgan, UK. As Director of CPSM at Zewail City, Obayya leads a team of 21 researchers working on solutions to help Egypt on various strategic fronts: solar energy conversion, using photonic wires to transfer data and medical diagnosis. CPSM has prolific research collaboration links with other centers at Zewail City, Egyptian universities and world-leading institutions.

Obayya is a leading scientist in the field of photonics, his focus is the area of Green NanoPhotonics, in particular the intelligent Computational Modeling of modern nanophotonic devices enabling technologies for efficient generation, distribution and utilization of sustainable energy. Obayya received the B.Sc. and M.Sc. degrees in electronics and communications engineering from Mansoura University, Egypt, in 1991 and 1994, respectively. His Ph.D. degree is from City University London in joint supervision with Mansoura University, 1999.

Obayya has achieved a track record of academic publications in Journals of the world’s largest professional associations:  namely the Institute of Electrical and Electronic Engineers (IEEE) and the Institute of Engineering and Technology (IET). Obayya is author of the book Computational Photonics published by a world-leading scientific publisher Wiley in September, 2010. Obayya has represented Zewail City at several international conferences both as a member of organizing committees and a speaker.

Obayya has previously won the State Incentive Award, normally granted to young researchers with high-impact research. He was granted this award at the age of 36.

About Zewail City of Science and Technology

The City is a non-profit, independent institution of learning, research and innovation. Its goal is to build a modern science and technology base that impacts national productivity through working together with existing governmental, non-governmental, societal and civic bodies.

The Center carries out world-class research in Nano photonics, enriches the research culture in Egypt and brings innovative solutions to societal problems. The CPSM research interests focus on the creation and use of novel computational modeling techniques for the analysis, design and optimization of micro- and nano-photonic devices with diverse applications in renewable energy, medicine, telecommunication systems, quantum information processing and laser system applications.

In less than a year, CPSM team published 9 Journal papers mostly in IEEE and IEE/IET Journals and Transactions, in addition to 20 international conference papers and three invited talks.