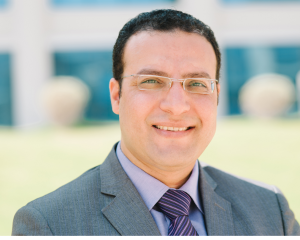 Cairo, 8 October - Ibrahim El-Sherbiny, Ph.D., Associate Professor of Nanomaterials Science, University of Science and Technology at Zewail City of Science and Technology has received Dr Venice Kamel Award for Scientific Creativity for Young Researchers in the field of Materials Science and its Applications. This award is offered to those who produce research of outstanding scientific value and have demonstrated rigor in the research and originality, it stresses on applied research in subjects related to development issues and solving societal problems.

El-Sherbiny has been awarded for his high impact research published in a number of cited international journals and for his contributions and achievements in this field. One of El-Sherbiny’s contributions is a promising approach for controlled pulmonary drug delivery which is of great help to patients with chronic diseases and who require prolonged periods of medication.

“Dr El-Sherbiny has achieved quite a lot in his time with the City which is under two years and he now has a key role in the Center for Materials Science, CMS” commented Dr Ahmed Zewail, Chairman of the Supreme Advisory Board of Zewail City in a word addressed to El-Sherbiny during the awarding ceremony held at the City.

Prior to joining Zewail City El-Sherbiny was Research Ass. Professor of Pharmaceutics, College of Pharmacy, University of Texas-Austin, TX, USA.

El-Sherbiny received the B.Sc. degree, with honor, in Chemistry and the MSc. in Polymer Science from Mansoura University, Egypt. He has awarded two graduate scholarships, from Egypt Government and from New Zealand. He earned his PhD degree in Drug Delivery in 2007 from Massey University, IFS, Palmerstone North, New Zealand.

He worked as Research Ass. Professor of Pharmaceutics, College of Pharmacy, University of Texas-Austin, TX, USA prior to which he was Consultant-Adjunct Appointment, PetrOtech-ffn Co., USA.

El-Sherbiny’s research focuses in particular on the design and development of new classes of “Smart nano- and nano-in-micro structure” using advanced techniques, and evaluating these new structures as potential candidates in various environmental, industrial, and biomedical applications including targeted drug delivery, tissue engineering and regenerative medicine.

El-Sherbiny has many academic publications in Journals of the world’s largest professional associations. El-Sherbiny has represented Zewail City at several international conferences both as a member of organizing committees and a speaker.

El-Sherbiny’s academic acumen has been recognized by being offered a “Fulbright Fellowship” at the University of Michigan, School of Biomedical Engineering in 2009 and he has previously won the State Incentive Award in Science from the National Academy of Scientific Research for the year 2012.

About Zewail City of Science and Technology

The City is a non-profit, independent institution of learning, research and innovation. Its goal is to build a modern science and technology base that impacts national productivity through working together with existing governmental, non-governmental, societal and civic bodies.