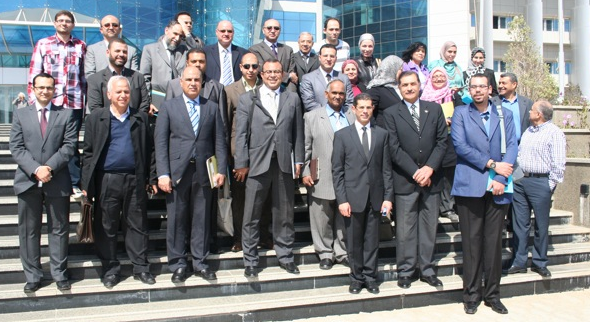 Zewail City of Science and Technology hosted a meeting on 20 March, with a number of heads, deputy heads, deans and representatives of various public and private Egyptian universities to discuss potential scientific collaboration.

The meeting was organized by both Zewail City and the Science Age Society, headed by Hossam Khairallah and Secretary-General Dr. Amr Hetta. During the meeting, The University of Science and Technology’s Academic Provost Dr. Sherif Sedky gave a presentation, in which he highlighted the City’s achievements, including the latest research studies being conducted at the City’s state-of-the-art Research Centers. He also discussed the preparations being made at The University of Science and Technology, which is currently accepting new students for the 2013-2014 academic year.

The attendees held an open discussion on means of cooperation, in which they exchanged experiences and discussed the resources available at the various universities and at Zewail City, which is equipped with state-of-the-art equipment, a team of distinguished researchers and a library that hosts databases covering over 7000 up-to-date journals and 35,000 scientific books.

After taking a tour of the City, its Research Institutes and university, the attendees expressed how impressed they were with the number of achievements the City made in the short period since its launch. The attendees agreed to facilitate future meetings between the professors and researchers with the aim of commencing scientific collaboration.