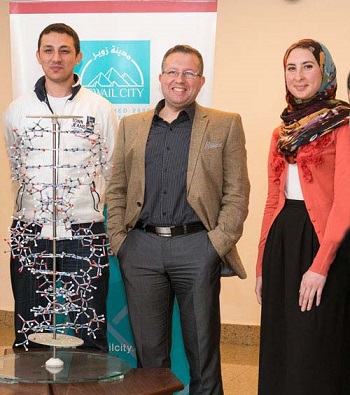 Doxorubicin is a widely used anticancer drug. Unfortunately, the clinical use of doxorubicin has the serious drawback of cardiotoxicity. In a new research paper, a group of Zewail City researchers investigate new inhibitors that could suppress the doxorubicin-induced cardiotoxicity.

“The importance of doxorubicin lies in the fact that it is the first line therapy for breast cancer and many other solid tumors,” said Prof. Sherif El-Khamisy, director of the Center for Genomics, explaining why the team chose to work with doxorubicin.

The team analyzed the effect of a library of natural compounds when combined with doxorubicin on a breast cancer cell line. Their examination showed that Harmine, inhibitor implicated in Alzaheimer’s disease, showed the best functional interaction with doxorubicin.
After testing the effect of Harmine on other chemotherapies like camptothecin and Etoposide, the team concluded that Harmine may offer a new therapeutic opportunity to suppress the cardiotoxicity caused by doxorubicin.

“Using harmine allowed us to decrease the dose of doxorubicin without affecting its normal effect or potency. We expect that this approach could decrease the cardiotoxicity.” said Mohamed Ashour, second author in the paper.

The team of Reham Attya, Mohamed Ashour, and Elsayed Ibrahim, led by Prof. Sherif El-Khamisy, published their findings in Mechanisms of Ageing and Development, an Elsevier Journal, in June, 2016.

The team hopes that this work will set the course for further research and a possible treatment for doxorubicin-induced cardiotoxicity.