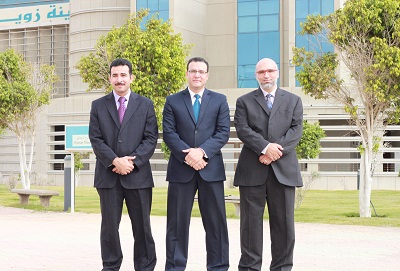 The Academy of Scientific Research and Technology (ASRT) announced the winners of the 2014 individuals and authorities prizes on October 27, 2015. Zewail City scientists Ibrahim El-Sherbiny, Mohamed Farahat, and Ahmed Maarouf were named among the recipients of the ASRT awards this year.

Dr. Ibrahim El-Sherbiny, professor of nano and materials sciences, received the Prize of late Prof. Abdou Salam in the field of pharmaceuticals and bioproducts. This comes in recognition of El-Sherbiny’s high impact research, published in a number of cited international journals, in the field of designing and developing smart nanomaterials that enhance the process of effective drug delivery.

El-Sherbiny was also the recipient of the State Incentive Award in science and the Venice Kamel Award for Scientific Creativity for Young Researchers in the field of materials science and its applications.

The AU-TWAS Young Scientists National Award went to Dr. Mohamed Farahat, researcher at the Center for Photonics and Smart Materials, for his contributions in the area of computational modelling of a wide range of novel photonic devices to give the best performance for low-carbon applications.

Farahat’s research work has also enabled him to win the 2014/2015 Incentive State Award for Engineering Sciences from the Egyptian government, the 2014 Mansoura University Incentive Award, and the Award for Best Poster Presentation at International Conference on Material Sciences and Applications.

Similarly, Dr. Ahmed Maarouf, visiting professor at the Center for Fundamental Physics, was awarded the Amin Lotfy Prize in physical sciences for his scientific contributions in the field of electronic properties of graphene and its industrial applications. Maarouf has also won the 2001 Distinguished Tutor Award in Physics from the University of Pennsylania and the 2011 Internal Recognition Award from IBM Watson Research Center.

The Academy of Scientific Research and Technology (ASRT) is a non‐profit organization affiliated to the ministry of scientific research. It was established in September 1972 by the presidential decree number 2405 as the national authority responsible for science and technology in Egypt. Within this context, ASRT encourages basic and applied research, organizes material and moral incentives, and grants state awards in all branches of science.