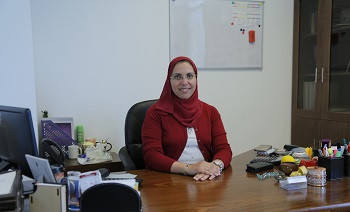 The Academy of Scientific Research and Technology (ASRT) announced the winners of the 2015 State Incentive Awards on May 17, 2016. Prof. Reem Arafa, professor of biomedical sciences at Zewail City, was awarded the Advanced Technological Sciences Award for Medical Sciences jointly with Dr. Ahmed Ehab, associate professor in the American University in Cairo (AUC). Arafa has been granted the award for her high impact research published in a number of cited international journals and for her contributions and achievements in the biomedical sciences field.

Arafa was thrilled to receive the news about receiving the award, “It gave a mixed feeling of extreme happiness and high honor to be recognized by the state for my scientific work,” said Arafa. “Indeed, getting such a high value recognition is a motive and added responsibility to complete the path I have started to serve my country and the scientific community in large in the field of biomedical sciences research,” she added.

Arafa believe in the value of women contributions to science, stressing on the importance of spreading the word among young female scientists and all girls that would like to study science. “Empowering women in science is a way to integrate half of the community's human task force into exploring the fields of the scientific arena. It was said that it is hard for women to keep a balance between their social responsibilities and the burden of their scientific endeavors. I say they surely can." she said.

Arafa was also awarded the David W. Boykin Graduate Fellowship in Medicinal Chemistry from Georgia State University. She has also been annually awarded the Cairo University International Publications Award since 2010.

Arafa is currently the director of biomedical sciences graduate program, and coordinator of the drug design and development concentration at the University of Science and Technology at Zewail City. She has also participated in the development of pharmaceutical chemistry, organic chemistry and drug design courses at both the undergraduate and graduate levels in many universities such as Cairo University, Georgia State University, Modern Sciences and Arts University (MSA), among others.

Arafa’s research focus on the area of drug design, synthesis and discovery of small molecule modulators of biological systems, anti-HIV agents, anticancer agents with kinase inhibitory activity, carbonic anhydrase inhibitors, and small molecules with anti-inflammatory capacity.
Arafa has published 40 papers in high impact peer-reviewed international journals such as the Journal of the American Chemical Society, Biochemistry, and the Journal of Medicinal Chemistry. She also serves as a reviewer on a number of national and international scientific journals such as the European Journal of Medicinal Chemistry, Drug Research, Current Medicinal Chemistry, Monatshefte für Chemie, and the Journal of Advanced Research, among others. She has four U.S. patents in the area of drug design and discovery of biologically active agents.

The Academy of Scientific Research and Technology (ASRT) is a non‐profit organization affiliated to the ministry of scientific research. It was established in September 1972 by the presidential decree number 2405 as the national authority responsible for science and technology in Egypt. Within this context, ASRT encourages basic and applied research, organizes material and moral incentives, and grants state awards in all branches of science.