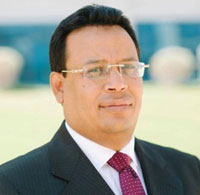 Prof. Shaaban Khalil is the chair of a committee in the African Academy of Science (AAS) for establishing the first Synchrotron and light source in Africa. Synchrotron light source is an important mega project. It is a large accelerator that generates very intense pulses of light/X-rays, with wavelengths and intensities that permit accurate studies to be performed on objects of different sizes from human cells and viruses to atoms.

The African Academy of Science (AAS) has recently opened a discussion on this initiative and formed a committee that Prof. Khalil chaired to set up a road map for establishing this project. In fact, if this happens, it would be one of the greatest achievements for the AAS.

Prof. Shaaban Khalil is one of the prominent High Energy Physicists in the Middle East. He is well known for his outstanding contributions to the understanding of possible new physics beyond the standard model of particle physics. He is the founding director of the Center for Fundamental Physics at Zewail City of Science and Technology in Egypt, since 2012. He published more than 200 scientific papers in renowned scientific journals. His work enabled him to obtain the D.Sc. degree in 2006. He is also the co-author of the book on Supersymmetry published in CRC Press in the UK.