Dream to Reality through Science: A Lecture by Essam Sharaf 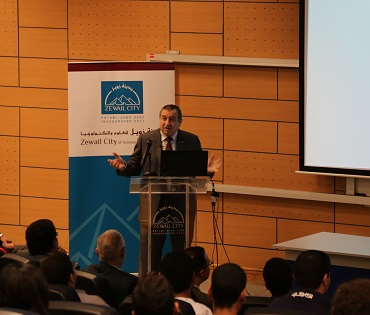 On October 19, 2015, Essam Sharaf, professor of road engineering at Cairo University, visited Zewail City of Science and Technology where he gave a talk to more than 100 student and faculty member. Titled “Dream to Reality through Science,” Sharaf’s talk focused on the important role science plays in shaping the future.

“The world as we know today was once someone’s dream about the future,” said Sahraf in his talk, adding “Judging by the technological advancement we have witnessed during the past 20 years alone, it became obvious that anything is possible.”

From this point, Sharaf started to discuss the relationship between science and society. He stated that our human needs are the drive behind the questions scientists investigate and the problems they seek to solve. Similarly, working hand in hand with technology has transformed our understanding of the world and the way we live.

There is no doubt that the emerging scientific knowledge is a double-edged weapon. Though meant to serve the greater good, it could be easily turned into a destructive force that threatens our very existence. On that account, Sharaf underlined that the role of a scientist is not limited to carrying reliable research; it expands to spreading awareness and educating the public.

At the end of the lecture, Sharaf stressed on the fact that “the future belongs to those who go out and create it. And to create the future, one must dare to dream.”