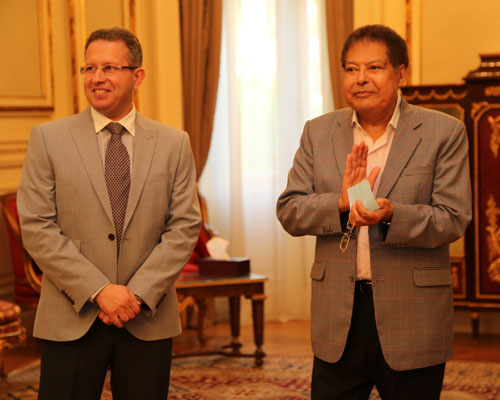 Professor Sherif El-Khamisy, director of the Center for Genomics at Zewail City of Science and Technology, won the 2014 Abdul Hameed Shoman Award for Arab Researchers in medical and health sciences. The award recognizes the valuable research work El-Khamisy has conducted in the field of upscale molecular genetics.

Professor Ahmed Zewail, chairman of the board at Zewail City of Science and Technology, congratulated El-Khamisy and expressed his appreciation for El-Khamisy’s valuable work and research as director of the Center for Genomics, wishing him more successful steps towards making Zewail City a hub for scientific research in Egypt.

El-Khamisy’s work led to the discovery of a novel genetic pathway in 2009 and the identification of the first human disease with defects in this pathway in 2014. Driven by his initial training as a pharmacist, El-Khamisy is leading initiatives to translate these findings to the clinic. His work is of significant impact in the field of genome research and medicine with 1,965 citations and an H-index of 20 with an average impact factor of 14.

He has been elected as a Fellow of the Royal Society of Biology (FRSB), a Fellow of the Lister Institute of Preventive Medicine in the United Kingdom, and a Fellow of the British Higher Education Academy. El-Khamisy is the co-founder of the Egyptian Young Academy of Science and serves on its scientific advisory board.

El-Khamisy’s main research interest is in the field of genome research and medicine. El-Khamisy’s research is funded by a program grant from Zewail City, the Science and Technology Development Fund, the Wellcome Trust, Cancer Research UK, the Royal Lister Institute, and the Biotechnology and Biological Sciences Research Council.

El-Khamisy’s team published over 35 peer-reviewed papers including two articles in Nature in 2005 and 2009, one in Nature Communications in 2012, one in Nature Genetics in 2014, and one in Nature Rev Cancer in 2015. He authored and co-authored other papers in many prestigious journals such as Cell, EMBO Molecular Medicine, Nucleic Acid Research, Molecular and Cellular Biology, British Journal of Cancer, and Human Molecular Genetics among others.

The same award has been given to Prof. Salah Obayya, vice chair for academic affairs, in engineering sciences in 2013. Prof. Shaaban Khalil, director of the Center for Fundamental Physics, was also a recipient of the Abdul Hameed Shomaan Award in physics prior to joining Zewail City in 2001.

The Abdul Hameed Shoman Award for Arab Researchers was launched by the Abdul Hameed Shoman Foundation in 1982. It is awarded as an appreciation for distinguished scientific work; the dissemination and publication of which will lead to promoting applied and scientific knowledge, increasing awareness on the culture of scientific research; and will contribute to solving problems of priority at the local, regional and international levels.