Higgs boson.. A clue to the universe DNA 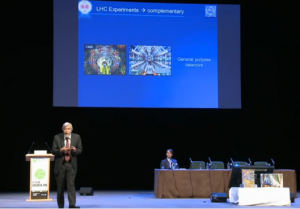 Since the mid–20th century, the standard model of particle physics accurately described just 5% of our universe. The rest was dark and unknown. But now our understanding of the universe is about to change.

This is how Rolf–Dieter Heuer, director general of the European Organization for Nuclear Research (CERN) started his keynote speech at the EuroScience Open Forum 2012 (ESOF2012) that took place 11-15 July at Dublin, Ireland.

To account for this unknown, scientists assumed the presence of a particle, called the Higgs boson, which would give mass to substances. The Higgs boson was considered as the last missing cornerstone in the standard model of particle physics.

CERN has announced on the 4th of July, that they detected a Higgs boson-like particle in the Large Hydron Collider (LHC) beneath the Franco-Swiss border near Geneva. Physicists consider the Higgs boson as the key to the dark universe.

"The standard model of physics left many questions open, like it doesn't say in how many spaces and dimensions we live in and what is dark energy," said Heuer.

When it was first proposed, the standard model of particle physics described electromagnetic, weak, and strong nuclear interactions and applied only for massless particles Physicists needed a second mechanism that fits with the standard model to make it apply for particles with mass.

That was when scientists, including the Scottish scientist Peter Higgs, suggested in 1964 the presence of a particle responsible for giving mass to all other particles, giving rise to neutrons all the way to massive stars. "Higgs Field explained how the carriers of the weak nuclear forces get their masses," said Shaaban Khalil, director of the Center of Theoretical physics (CTP) at Zewail City of Science and Technology.

Higgs field is a scalar field that has no preferred direction, "It is like if you are swimming in a large swimming pool the water force on you is independent on which direction you swim," said Heuer.

The particles that move through this scalar field gain energy by interacting with it. The stronger the interaction between the field and the particle, the more mass the particle has. The Higgs field has a peculiarity as it can interact with itself too, and this is the signal as to whether the field exists or not.

"Discovering the Higgs boson at the LHC confirms the Higgs mechanism and sheds light on the way that mass is generated. This would be the first time to understand where mass comes from," says Khalil enthusiastically.

The LHC results will help scientists study the Higgs boson particle and how it works in more detail. It will be the first study of a scalar field and could be the very first step to understanding dark energy and giving us information about dark matter as well.

"The problem with Higgs Boson is that we know everything about it, except if it does exist," Said Heuer. 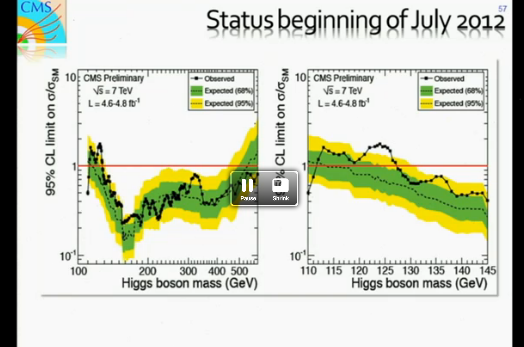 Graph shows the possibility of the presence of the Higgs boson

At LHC, 100 billion protons collide together 40 million times per second, trying to mimic the conditions at the birth of the universe.

The scientists as CERN had to perform over half a trillion proton collisions in order to create a handful of Higgs bosons, which made it tricky to actually detect the particle before it decayed into other particles. "It is like trying to find some special snow flake during a snow fall in a snowy field," explains Heuer.

"Now we have something virtually in our hands that we can studyand learn much more about the beginning of the universe," says Heuer.

You can watch the full keynote speech at:

The particle physics group of Center For Theoretical Physics (CTP), Center for Fundamental Physics (CFP), at Zewail City of Science and Technology is currently involved in analyzing the impact of these results on the Standard Model and theories of supersymmetric extension of the standard model that may predict this value of Higgs mass.