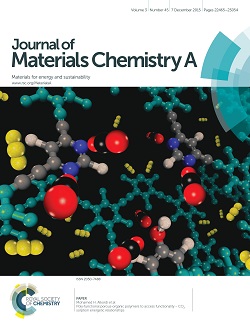 With the increasing impacts of climate change on our society, reducing emissions of Carbon dioxide (CO2) and separating it from non-harmful flue gas is essential for mitigation measures. To this end, scientists are in pursuit of practical and efficient ways that could reduce the effect of CO2 on the environment.

In a new study published in the September 2015 issue of the Journal of Materials Chemistry A, a team of researchers from Zewail City of Science and Technology and King Abdullah University of Science and Technology (KAUST) report on the relationship between the chemical structure of porous organic polymer systems and their efficiency in adsorbing CO2 molecules by using a one-pot synthesis strategy. This strategy was shown to be compatible with several functional groups and to produce porous organic polymers.

The team- led by Dr. Mohamed Alkordi, co-director of the Center for Materials Science at Zewail City- was able to systematically investigate the affinity of organic polymers toward CO2 through using 11 different functional groups, such as (phenols and carboxylic acids, among others). The nature of porous organic polymers makes them serve as sponges absorbing gases; however, to force them to select a certain gas, an appropriate functional group needs to be added to their structure. Functional groups are a set of specific atoms within a molecule that determine the molecule’s overall reactivity and properties. Small differences in functional groups can result in drastic differences in the properties and reactivity of the molecules.

“After almost a year of investigating different functional groups, we came to the conclusion that electron-pair donors (Lewis-base) functionality inside the porous polymers proved better binding to CO2,” said Alkordi.

According to Alkordi, the team’s synthesized polymers can open more doors for materials designers to tailor specific materials that could selectively trap CO2 and it could be applied for other harmful gases. The team has plans to construct membranes incorporating porous organic polymers to help in CO2 capture in post-combustion applications and toward natural gas purification.

To read the full research, please visit the Journal of Materials Chemistry A.