Prof. Obayya Elected Fellow by the World’s largest Technical Professional Organization For the Advancement of Technology 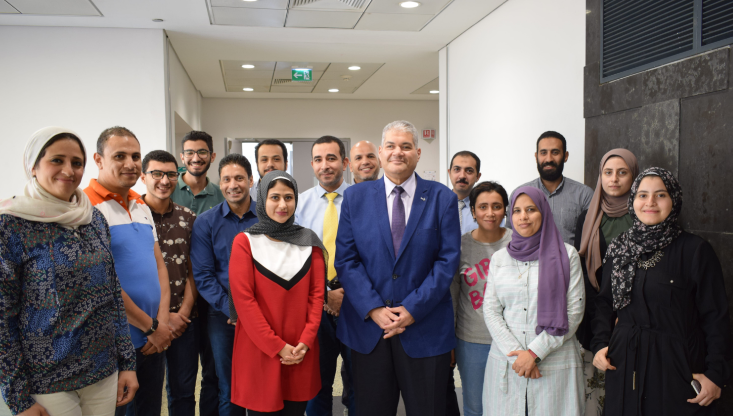 In recognition of Professor Salah Obayya’s achievements and contributions in the field of computational Photonics, the Board of Directors of the Institute of Electrical and Electronics Engineers “IEEE “at its November 2020 meeting, has decided to elevate his rank to IEEE Fellow.

Each year, following a rigorous evaluation procedure, the IEEE Fellow Committee recommends a select group of recipients for elevation to IEEE Fellow. Less than 0.1% of voting members are selected annually for this member grade elevation.

Since its establishment in 1963, Dr. Salah is the first Arab and African to be elected as an IEEE Fellow in Photonics to join a distinguished group of technical professionals whose core purpose is to foster technological innovation and excellence for the benefit of humanity.

It’s noteworthy that the IEEE is the leading professional association for the advancement of technology. With more than 400,000 members in more than 160 countries, IEEE is the world's largest technical professional society. Through its global membership, IEEE is a leading authority on areas ranging from aerospace systems, computers and telecommunications to biomedical engineering, electric power, consumer electronics, and many other technical areas. Members rely on IEEE as a source of technical and professional information, resources, and services.

This recognition brings honor not only to Zewail City but to the entire region.

Salah S A Obayya joined Zewail City of Science and Technology (ZC) in 2012 where he is now Chair Professor and Founding Director of Center for Photonics and Smart Materials (CPSM). He occupied the positions of the Vice Chairman of Academic Affairs and Director-General of Research Institutes at the same institution. Prior to Zewail City, he took up several academic posts at Brunel University UK (tenured Associate Professor, 2002), University of Leeds, UK (tenured Professor, 2006) and University of South Wales, UK (tenured Chair Professor, 2008) where he was the Founding Director of Photonics and Broadband Communications (PBC) Research Center and also he was the Director of Postgraduate Programs at the same institution. In May 2006, he has been naturalized as a “British” citizen.

He has established an outstanding international reputation in the area of green nanophotonics with a focus on the intelligent computational modeling of modern nano-photonic devices enabling technologies needed to realize a low-carbon green society. He has published 258 journal publications, mostly in OSA, IEEE and IET/IEE, authored 3 books (Computational Photonics, Wiley 2010 and Computational Liquid Crystal Photonics, Wiley 2016, Computational of Photonic sensors, 2018) both are adopted references for Graduate Programs in Photonics at international Universities such as MIT, Purdue University, Indian Institute of Technology, National University of Singapore, Mansoura University and Zewail City, and 263 conference papers in international conference in photonics, many of these are invited talks, and keynote lectures, attracted external funding, from both industry and Research Councils, in the region of $ 4M, and supervised to successful completion 35 Ph.D. students, over 70 MSc/MRes/MPhil students and 15 postdoctoral research fellows. He led the team that developed one of the world’s best comprehensive numerical packages for the analysis, design, and optimization of nano-photonic devices, and subsystems, where a number of “world-first” numerical approaches have been developed. His five key papers introducing his novel numerical package; have been cited more than 400 times.  His publications also have been cited more than 3350 times, with an h-index of 31 and i10-index of 100. His numerical package has been widely adopted by both academic and industrial Photonics communities to analyze, design, and optimize the performance of a wide range of nano-photonic devices employed for applications in solar cells, optical telecoms, sensing, optical imaging and encryption, and other applications.

He has served the International Photonics Society through active contribution to the organization and technical committees of a number of international conferences. Since 2007, he has been an Associate Editor-in-Chief of the IEEE Photonics Technology Letters, and Associate Editor-in-Chief of the Journal of Optical and Quantum Electronics, and served as Guest Editor-in-Chief of J Optical and Quantum Electronics (2010), and founding member of Editorial Board of Materials Theory Journal (Springer) and acted as Reviewer for many international Photonics Journals such as IEEE J Lightwave Technology, IEEE Photonics Journal IEEE J Quantum Electronics, IEEE J Selected Topics in Quantum Electronics, IET Optoelectronics, OSA Optics Express, OSA Optics Letters, and many others. Moreover, he acted as a Technical Expert and Reviewer for a number of research funding councils and learned societies such as Engineering and Physical Sciences Research Council (EPSRC), UK, Royal Society, UK, Royal Academy of Engineering, UK, National Academy of Arts and Sciences, Holland, Science and Technology Development Fund, Egypt, National Telecom Regulatory Authority (NTRA), Egypt and others.

Recently, Dr. Obayya was elected as the first Arab and African Fellow of the Optical Society of America (OSA) in Sep. 2019 and IEEE Fellow starting from Jan 2021. He was elected Fellow of African Academy of Science (AAS), 2018, and Chairman of Nanotechnology Group of AAS. Also, He was elected as a board member of the Egyptian Society of Optical Science and Applications (ESOSA), elected Fellow of the Institute of Engineering and Technology, IET (formerly FIEE), UK, 2010, elected Fellow of The Institute of Physics (IoP), UK, 2010, elected Fellow of The Higher Education Academy, UK, and Senior member of IEEE, USA, 2005, member of Board of Academy of Scientific Research and Technology (Egypt’s National Academy of Science), Member of Wales Institute of Mathematical and Computational Sciences (WIMCS), UK, Member of Optical Society of America (OSA), Member of International Society for Optical Engineering (SPIE), USA and Member of Applied Computational Electromagnetic Society (ACES).

As remarkable recognition of his research achievements, he was the recipient of many national and international awards and recognitions such as Order of Science and Arts of the first class, the most prestigious medal awarded by President of Egypt, President Abdel Fattah el-Sisi, in the National Science Day, Egypt, 2019, Best Scientific Book, COMSTECH-Awards-2017, 2019, State Appreciation Award, Egypt, 2019, UNESCO Chair, Paris, 2019, Honorary Special Chair Professor of Photonics, University of Nottingham, UK, 2017, for his outstanding world-class research record, elected Senior Associate by Board of Directors, International Center for Theoretical Physics (ICTP), Italy, 2017, for his pivotal role in photonics research and education in Egypt, The Region and Africa and elected Senior Member by Board of Directors, Optical Society of America, OSA, 2017 for his internationally recognized research in Photonics, UAE President Khalifa Award for Distinguished Arab Professor in Scientific Research in April 2017, Doctor of Science (DSc) degree in Photonics from City University of London in Jan 2016; a degree awarded only to those who gained international distinction in their own fields, Arab Thought Foundation Award in Scientific Creativity (Lebanon), Dec. 2015; only one award in all fields of Science and Engineering is granted each year for one Arab Scientist, Egyptian Academy of Scientific Research and Technology (ASRT) Award in Engineering Sciences Creativity, Sept. 2014; only one award is granted each year for an Egyptian Scientist in Engineering Sciences, Abdul Hameed Shoman Foundation (Jordan) Award for Arab Scientists in Engineering Sciences, Oct. 2014; only one award is granted each year for one Arab Scientists in Engineering Sciences, State Award of Excellence for Engineering Sciences from the Egyptian State, Sept. 2013; only one scientist is awarded this prestigious award every year, Incentive State Award for Engineering Sciences from the Egyptian State, Sept. 2005, and many others.