Prof. Shaaban Khalil to Give Talk at ICHEP 2016 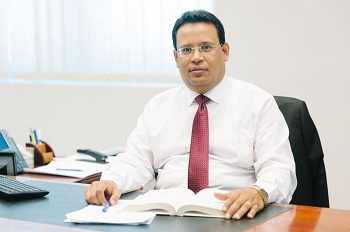 Professor Shaaban Khalil, director of the Center for Fundamental Physics (CFP) at Zewail City, has been invited to give a plenary talk at the 38th International Conference on High Energy Physics (ICHEP 2016), which will be held in Chicago from August 3 to 10, 2016.

Khalil’s lecture, titled: “Probing Supersymmetry and Beyond the Standard Model through Flavor Physics”, will discuss the important role flavour physics play in testing the SM. He will also tackle the possibility of having new physics beyond the SM and how this possibility is given by a supersymmetric extension of the SM.

High energy physics is one of the main research areas at CFP. Researchers at CFP have published 20 papers on supersymmetry and another 20 on non-supersymmetric beyond the standard model.

The 38th International Conference on High Energy Physics (ICHEP 2016) is the premier gathering of scientists and engineers from around the world who are teaming up to run experiments, create new theories, and develop new models to determine the physical foundations that underpin our universe.