Salah Obayya Elected Fellow of the Most Prestigious Society in USA

As the first African and Arab scientist: Obayya Elected Fellow of the Most Prestigious Society in USA 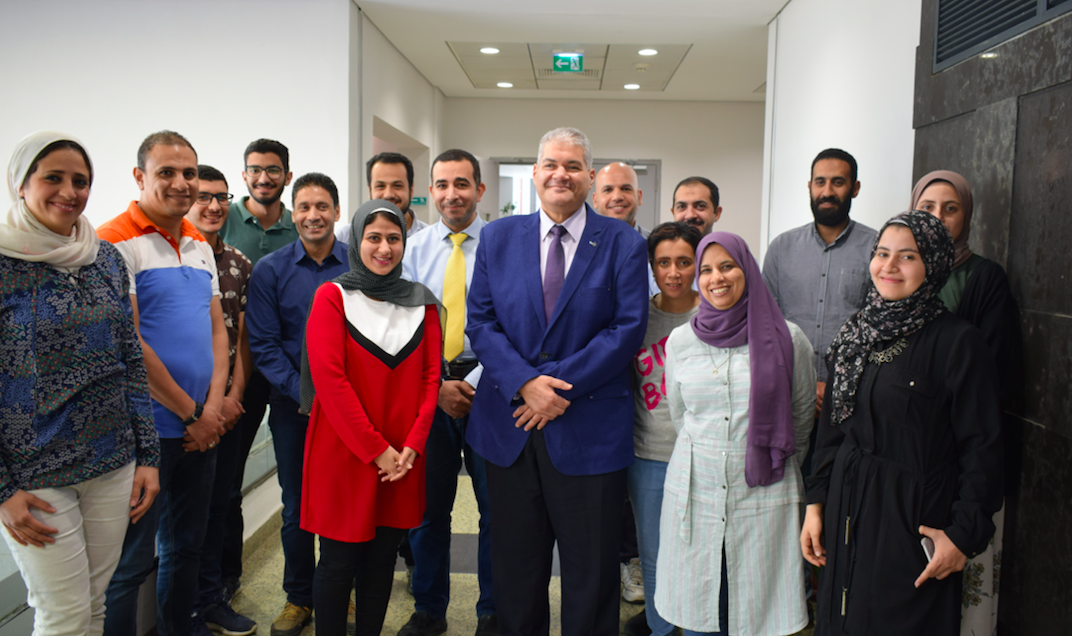 The Board of Directors of The Optical Society (OSA) has elected Dr. Salah Obayya a Fellow of the Society during their 16 September 2019 meeting in Washington, DC, USA. Election to OSA Fellow came as a culmination of his research leadership and seminal contributions to Computational Photonics.

Dr. Salah Obayya has received a letter from President of The Optical Society of America (OSA) congratulating that he was elected Fellow of OSA for research leadership and seminal contributions to Computational Photonics and continued active participation in the field and the work of the Society.

According to the regulations of this prestigious society the total number of elected Fellows doesn’t exceed 0.5% of its members. Since its establishment in 1916, Dr. Salah came as the first Arab and African elected OSA Fellow and affiliated to an Arab and African institution like Zewail City of Science and Technology.

As an OSA Fellow, Dr. Salah Obayya joins a distinguished group of members who have served the Society and the optics and photonics community with distinction.

OSA is the leading professional association of individuals and companies with an interest in optics and photonics. It is the leading forum for light science and technology. It was founded 100 years ago as The Optical Society of America and has evolved into a global enterprise serving a worldwide constituency. In recognition of its global reach and focus, since 2008 the Society has been known as OSA - The Optical Society.

Where he is now Chair Professor and Founding Director of Center for Photonics and Smart Materials (CPSM). Previously, he was the Vice-Chair for Academic Affairs and Director-General of Research Institutes at the same institution. Prior to Zewail City, he took up several academic posts at Brunel University UK (tenured Associate Professor, 2002), University of Leeds, UK (tenured Professor, 2006) and University of South Wales, UK (tenured Chair Professor, 2008) where he was the Founding Director of Photonics and Broadband Communications (PBC) Research Center and also he was the Director of Postgraduate Programs at the same institution. In May 2006, he has been naturalised as “British” citizen.

He has established an outstanding international reputation in the area of green nanophotonics with focus on the intelligent computational modeling of modern nano-photonic devices enabling technologies needed to realise low-carbon green society. He has published 238 journal publications, mostly in OSA, IEEE and IET/IEE, authored 3 books (Computational Photonics, Wiley 2010 and Computational Liquid Crystal Photonics, Wiley 2016, Computational of Photonic sensors,2018) both are adopted references for Graduate Programs in Photonics at international Universities, and 252 conference papers in international conference in photonics, many of these are invited talks, and keynote lectures, attracted external funding, from both industry and Research Councils, in the region of $ 4M, and supervised to successful completion 30 PhD students, over 70 MSc/MRes/MPhil students and 15 postdoctoral research fellows. He led the team that developed one of the world’s best comprehensive numerical packages for the analysis, design and optimization of nano-photonic devices, and subsystems, where a number of “world-first” numerical approaches have been developed. His numerical package has been widely adopted by both academic and industrial Photonics communities to analyze, design and optimize the performance of a wide range of nano-photonic devices employed for applications in solar cells, optical telecoms, sensing, optical imaging and encryption and other applications.

He has served the International Photonics Society through active contribution to the organization and technical committees of a number of international conferences. Since 2007, he has been an Associate Editor-in-Chief of the IEEE Photonics Technology Letters, and Associate Editor-in-Chief of the Journal of Optical and Quantum Electronics, and served as Guest Editor-in-Chief of J Optical and Quantum Electronics (2010), and founding member of Editorial Board of Materials Theory Journal (Springer) and acted as Reviewer for many international Photonics Journals such as IEEE J Lightwave Technology, IEEE Photonics Journal IEEE J Quantum Electronics, IEEE J Selected Topics in Quantum Electronics, IET Optoelectronics, OSA Optics Express, OSA Optics Letters, and many others. Moreover, he acted as Technical expert and Reviewer for a number of research funding councils and learnt societies such as Engineering and Physical Sciences Research Council (EPSRC), UK, Royal Society, UK, Royal Academy of Engineering, UK, National Academy of Arts and Sciences, Holland, Science and Technology Development Fund, Egypt, National Telecom Regulatory Authority (NTRA), Egypt and others.