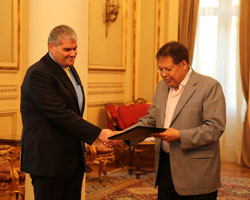 Professor Salah Obayya, vice chairman, academic affairs, at Zewail City of Science and Technology, has been chosen to receive the Senior Doctor of Science degree by City University London, U.K. during the university’s convocation ceremony in January 2016.

The award comes in recognition of Obayya’s sustained scientific contributions which have gained him an internationally-distinctive position among the international photonics community. The Doctor of Science degree is an award of considerable distinction that acknowledge recipients’ outstanding published work judged to contain original contributions to the advancement of knowledge in a given scientific field.

Professor Ahmed Zewail, chairman of the supreme advisory board at Zewail City of Science and Technology, congratulated Obayya for this achievement which makes him the first Egyptian to receive this honorary degree in engineering from a university in U.K.

Obayya has earned his international distinction through his rigorous research work. In addition to publishing 137 papers, mostly in high impact journals such as the Optical Society of America (OSA), the Institute of Electrical and Electronics Engineers (IEEE), and the Institute of Engineering Technology and the Institution of Electrical Engineers (IEE), Obayya has published 160 conference papers and has delivered 20 keynote lectures and invited talks at major conferences. He is also the author of two books: “Computational Photonics” and “Computational Liquid Crystal Photonics” published by Wiley, New York.

Obayya is well-known for his research efforts in the area of green nanophotonics. His research focus is on intelligent computational modeling of modern nanophotonic devices. This line of research will enable technologies for the efficient generation, distribution and utilization of sustainable energy; ultimately contributing toward a low-carbon green society.