Student union elections: results are in! 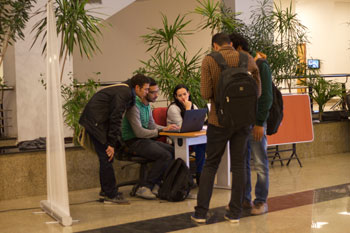 The University of Science and Technology student union election results were announced on Monday, December 2, 2014, marking the second election process to be overseen by the university.

“The university is not just where we study. It is where we belong,” said Mahmoud Abdelhay, elected student union president, explaining why giving back to the university is a cause worthy of his attention and efforts. He added that he will strive to devote himself to facilitate student activities and services. “Bringing more innovation is at the heart of my plan to enrich students’ campus life,” he said.

Dr. Ashraf Badawi, dean of students affairs, commented on the election saying, “The election process was fully electronic from the nomination to the voting and the results were available instantaneously.” The university administration values its students and their on-campus life. “We are eager to work together with the students to provide them with a delightful experience during their studies at Zewail City,” Badawi said.

The recently elected student union is represented by: