The Chilean Ambassador to Egypt honored Prof. Ibrahim El-Sherbiny with the Magellan Award 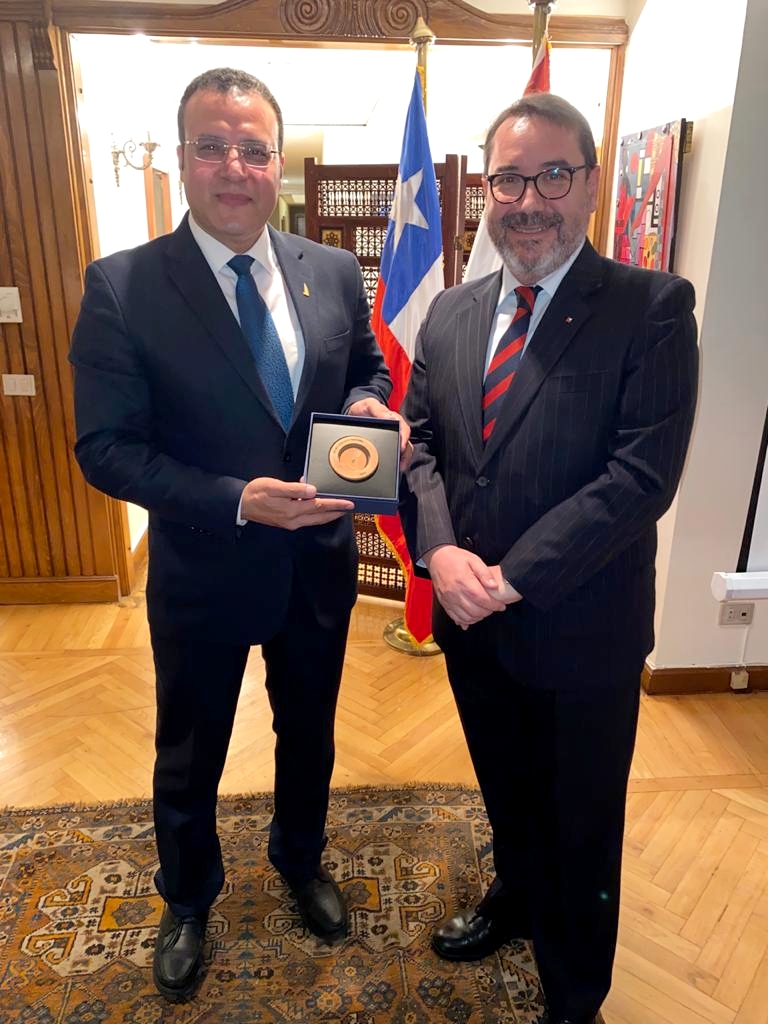 The Chilean Ambassador “Pablo Arriaran '' honored Prof. Ibrahim El-Sherbiny, Founding Chairman of the Nanoscience Program and Director of the research center of Materials Science in Zewail City of Science and Technology, and the honoring came from the Republic of Chile and the Image of Chile Foundation after choosing Prof. El-Sherbiny among a group of innovators worldwide to receive The Magellan Award. Moreover, the honoring took place in a big ceremony at the residence of the Chilean Ambassador “Pablo Arriaran" in Cairo.

Prof. Ibrahim El-Sherbiny was chosen to be honored and won the Magellan Award due to the excellence of his research in the field of nanotechnology and its applications in several fields, of which most importantly is the medical field. This honoring decision was done through a specialized committee from the Chilean government and the Image of Chile Foundation to evaluate the candidates from the Chilean embassies around the world based on global standards related to the candidates' contributions in the field of scientific research and the importance of their innovations.

This year, the Chilean government is celebrating the 500th anniversary of the discovery of the Strait of Magellan in the far south of South America and linking the Atlantic and Pacific Oceans for the first time. The Chilean government seeks through this anniversary to shed light on some of the basic concepts that are related to this important achievement of humankind. The most important of which is the necessity of discovery and innovation in general in all aspects of life to respond to the scientific needs of our time and to contribute to spreading creativity and innovation to serve humanity.

It's noteworthy that Prof. Ibrahim El-Sherbiny works as a professor of Nanomaterials and Nanomedicine, Founding Chairman of the nanosciences program, director of the research center of Materials Science in Zewail City of Science and Technology, the vice-president of the Egyptian National Committee for New and Advanced Materials Science, and a member of the National Council for Drug Research of the Academy of Scientific Research in addition to being a member of the Higher Studies Council in the National Organization for Drug Control and Research of the Ministry of Health.