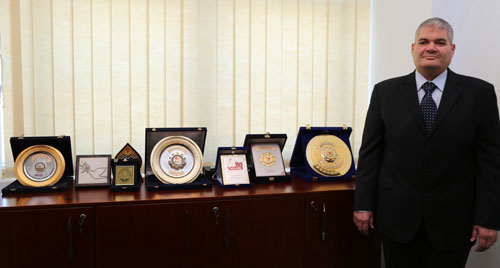 The Arab Thought Foundation has awarded Professor Salah Obayya, vice chair for academic affairs at Zewail City of Science and Technology, the Arab Creativity Award 2015 for science on Monday, December 7, 2015.

Obayya received the award from his Royal Highness Prince Khalid Al Faisal, Chairman of the Arab Thought Foundation. Held in collaboration with the League of Arab States, the ceremony was part of Fikr 14 conference activities.

“I am thrilled that one of the pioneering scientists at Zewail City and the Arab world has been given this reputable award,” said Professor Ahmed Zewail, Chairman of the Supreme Advisory board at Zewail City, “I am also proud of the research work Obayya and his research team at the Center for Photonics and Smart Materials has accomplished in the past three years. May God help us serve our beloved country, Egypt, my deep congratulations to Dr. Obayya” Zewail added.

The Arab Creativity Award, one of the most prestigious scientific awards in the Arab world, is granted annually to one Arab scientist for his international scientific contributions and rigorous published research work.

This award comes in recognition of Obayya’s sustained scientific contributions in the area of green nanophotonics. In addition to publishing 140 peer –reviewed journal papers, mostly in high impact journals such as the Optical Society of America (OSA), the Institute of Electrical and Electronics Engineers (IEEE), and the Institute of Engineering Technology (IET). Obayya has also published 160 papers in international conferences. Moreover he authored “Computational photonics” September 2010 and “Computational liquid crystal photonics” March 2016, both books are published by Wiley & Sons, New York, USA.

In January 2016, he was chosen to receive the Senior Doctor of Science degree D.Sc. by City University London, U.K. The D.Sc. is an award of considerable distinction that acknowledges recipients’ outstanding published work judged to contain original contributions to the advancement of knowledge in a given scientific field.

Obayya joined Zewail City in 2012, where he founded the Center for Photonics and Smart Materials (CPSM). Before that, he held many academic positions in prestigious universities in the U.K., such as the University of Leeds, till he was appointed as Full Professorial Chair of photonics at the University of Glamorgan, U.K.

The Arab Thought Foundation is an international independent non-governmental organization. It was instituted in Beirut May 5, 2000, on the occasion of proclaiming Beirut Arab Culture Capital.