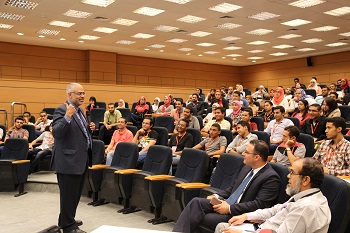 Zewail City has participated in this year’s National Science Week by organizing three main events at its Sheikh Zayed campus on Saturday, March 19, 2016.

The day started with a series of lectures presented by Zewail City scientists discussing the latest research in physics, nanoscience, and biomedicine, along with a research skills lecture to enhance the new generation of scientists’ abilities and help them to produce high quality research.

The City has also hosted a robotics workshop that provided an overview of robots mechanisms, dynamics, and intelligent controls through a series of sessions. The workshop was organized by IEEE RAS Egypt Chapter in cooperation with EG Robotics and IEEE Zewail City.

In their efforts to be vocal for environment conservation, Zewail City students organized a biking day to raise awareness of how to reduce our carbon footprint and contribute to a greener environment.

"Organizing such events is part our mission as Egypt’s National Project for Scientific Renaissance," said Dr. Mohammad Tawfik, Space and Communications Engineering Program coordinator. “From lectures given by renowned national and international professors, a robotics workshop, to a sports day aiming to raise awareness and care about the environment, this day should be organized more frequently,” he added.

Egypt’s National Science Week is a nationwide event that runs from March 11 to March 18 each year. The aim of the event is to promote science and technology across the country, through numerous lectures, panel discussions, science demonstrations, robot competitions, cultural events, and more, held at universities in major cities all over Egypt.