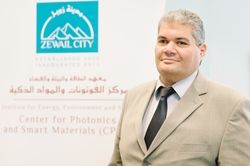 Professor Salah Obayya, director-general of research institutes at Zewail City, has won the state award for organizations and individuals in engineering innovation for 2013. The prize is awarded by Al-Shorouk Academy for Scientific and Technological Innovation and the Academy of Scientific Research and Technology (ASRT). Obayya was also the recipient of the same award for the previous year.

Obayya is also the director of the Center for Photonics and Smart Materials at Zewail City. Currently, Obayya is working with his team on a research project that aims to increase the efficiency of solar cells by 30%.

Obayya and his team at the CPSM have published more than 250 journal papers. He is also the author of the book Computational Photonics published by Wiley. Dr. Obayya has been elected fellow of the Institute of Physics and the Institute of Engineering and Technology in the U.K. From Egypt, he has won, among other honors, the top state award for engineering sciences.