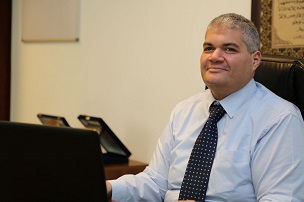 Professor Salah Obayya, director of the Center for Photonics and Smart Materials (CPSM) at Zewail City of Science and Technology, won the 2013 Abdul Hameed Shoman Award for Arab Researchers in engineering sciences equally with Dr. Nesreen Ghaddar, professor of mechanical engineering at the American University of Beirut, Lebanon. The award was given to Obayya for the valuable research work he has conducted in the field of green engineering.

Obayya has built an outstanding international reputation in the area of green nanophotonics, with a focus on the intelligent computational modeling of modern nanophotonic devices, enabling technologies for efficient generation, distribution and utilization of sustainable energy with the aim of developing a low-carbon green society.

He has served the international photonics community through his active contributions in the organization of a number of international conferences in which he was involved in many technical committees.

Obayya has a track record of 106 journal publications, mostly in IEEE and IET/IEE journals, and 130 conference presentations.  He is also the author of the book Computational Photonics, published by Wiley (New York) in 2010.

The Abdul Hameed Shoman Award for Arab Researchers was launched by the Abdul Hameed Shoman Foundation in 1982. It is awarded as an appreciation for distinguished scientific work, the dissemination and publication of which will lead to promoting applied and scientific knowledge, while increasing awareness on the culture of scientific research, and which contributes to solving problems of priority at the local, regional and international levels.