Zewail City research sparks debate about origins of the universe 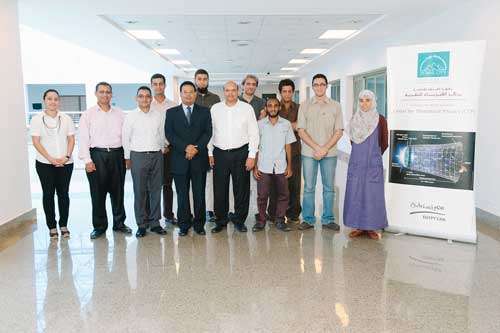 Recently, two researchers at Zewail City's Center for Theoretical Physics (CTP), Dr. Adel Awad and Dr. Ahmed Farag Ali, in collaboration with a researcher from the Indian Institute of Technology in Gandhinagar, Ahmedabad, reported that if high-energy light rays of different frequencies travel through the cosmos along different paths, which is a possible consequence of an idea for modified gravity known as rainbow gravity, then the universe may not have begun with a singularity but rather was in existence for an infinitely long time. Their work appeared in the Journal of Cosmology and Astroparticle Physics in October.

The findings were been picked up by international media and sparked a debate questioning the widely known big bang theory as an explanation for the origins of the universe. The core of the debate is: what if the universe had no beginning and time stretched back infinitely without a big bang to start things off? International media who have picked up on the study include the U.K.'S Daily Mail, Scientific American and top news organizations in the U.S., in addition to a number of television programs.

Professor Shaaban Khalil, director of the CTP, commented on these research findings saying, “It is a very interesting and important result, which shows that our idea about the universe may change if we consider a theory of gravity beyond Einstein's theory of general relativity. In fact, the study of the very early universe requires a theory that combines quantum mechanics with the theory of general relativity, which is known as the theory of quantum gravity. However, there are some difficulties in formulating such a theory. So far, the best candidate for quantum gravity is the superstring theory, known as the theory of everything. Nevertheless, this theory is not yet complete. Therefore, the theory of quantum gravity is an open problem and is one of the most important research areas in the world and in the CTP at Zewail City as well. Thus, one should be careful of any conclusion about the early universe at this stage, and should consider it as an attempt to understand the expected difference in results from Einstein’s classical theory for gravity.”

The CTP is part of the Egyptian Network for High Energy Physics, which acts as the nucleus of scientific cooperation between Egyptian experts in high energy physics and CERN in the Large Hadron Collider project. The CTP is also one of six research centers worldwide affiliated to the Abdus Salam International Centre for Theoretical Physics in Italy.

Zewail City of Science and Technology aims to create a step-change in the Egyptian research and education scene. The city houses ten different state-of-the-art research centers, all of which aim to produce research that will deal with long-standing inherent problems of Egyptian society and contribute to Egypt’s scientific and technological advancement. The Center for Theoretical Physics was one of the first centers established in the city. Since its establishment in February 2012, the CTP has been conducting ground breaking research in fundamental physics. The CTP gives Egypt a strong international presence in the most fundamental areas of modern science.