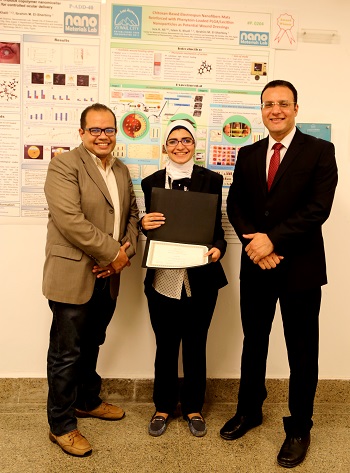 The variety of wound types has resulted in a wide range of wound dressings with new products frequently introduced to target different aspects of the wound healing process. The ideal dressing should achieve rapid healing, avoiding scars formation and wound contamination, and provide a convenient wound remedy with minimal inconvenience to the patient.

A team of Zewail City researchers, led by Dr. Ibrahim El-Sherbiny, professor of nanomaterials and joint director of the Center for Materials Science, developed a new kind of nanoparticles-in-nanofibers wound dressing that could deliver drugs and confer healing in a single-dose.

After inspecting several drugs in the market, the team conducted their research with Phenytoin, an antiepileptic drug, for its exhibited high wound healing activity. Though its proven efficiency in wound healing, Phenytoin’s limited solubility, limited bioavailability, and inefficient distribution limit its use.

To overcome these obstacles, the team incorporated the insoluble Phenytoin into different polymeric nano carriers in order to control the Phenytoin release and to enhance its overall biodistribution.

“Fabrication of wound dressings in a nanofibrous form rather than solid film can verify the previously mentioned features, particularly the rapid and complete healing with scars formation evading using a single-dose patch. This is due to the ability of manipulation of the nanofibers to possess higher aspect ratio, higher surface area, and consequently higher porosity during the fabrication process,” said El-Sherbiny.

The developed smart patches also showed a good healing quality. This was clearly observed through the histological assessment of the cured wounds that showed the highest epidermis formation with minimal necrotic and inflammatory tissues.

This study is part of a big project currently running by El-Sherbiny’s team to develop smart and more efficient wound dressings for diabetic patients.

The research team published their research article in the ACS Applied Materials & Interfaces Journal. Joining El-Sherbiny in this research were Isra Ali and Dr. Islam Khalil.