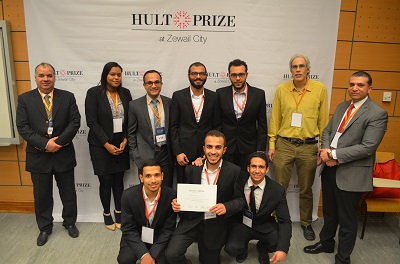 The selected team with Hult panel

Earlier in December 2015, 13 teams of Zewail City undergraduates competed in the inaugural Hult Prize competition, held at Zewail City, for a chance to win $ 1 million. On December 31, the Hult Prize Foundation revealed the name of the team that will advance to the 7th annual local and regional round of the competition.

Each year, the Hult Prize competition challenges students from around the world to provide an innovative solution that could eradicate one of the world’s critical social problems. The 2016 Hult Prize challenge is “Crowded Urban Spaces.” This challenge focuses on how to double the income of people living in poor areas, like slums and refugee camps, through improved mobility and increased connectivity to people and services by 2022.

“NEX,” a website and mobile application designed to provide a network of supply and demand among city and slum residents, was selected as the best submitted solution among the other teams.

“Our solution is based on the idea of making the internet less virtual. Through NEX, people who do not have many opportunities in the traditional job market outside of the crowded urban spaces, can double their income through offering others services like shipping, food and tutoring,” said Mohamed Mohsen, leader of the selected team.
Dr. Fareed Aboul-ela, associate professor of physics at Zewail City and one of the panel members, expressed that this year’s proposed social problem was challenging. “Doubling the income of 10 million people around the world is not an easy task. From the panel’s point of view, the concept of NEX carries the potential to touch a large number of lives worldwide,” said Aboul-ela.

Following the regional finals, one winning team from each host city will move into the Hult Prize Accelerator, a six-week program of intensive entrepreneurial seminars hosted by Hult International Business School. This fast-paced immersion program fosters the rapid implementation and uptake of the teams’ social business concepts with a proven methodology, professional mentorship, and 24-hour access to business facilities and resources.

The final round of the competition will be hosted by Former U.S. President Bill Clinton and the Clinton Global Initiative (CGI) at its annual meeting in September 2016. During the meeting, the finalists will pitch their ideas in front of a world-class audience, where Clinton and CGI delegates will select and award the winning team with $ 1 million in startup capital.

About the Hult Prize Foundation

The Hult Prize Foundation is a non-profit organization dedicated to launching the world's next wave of social entrepreneurs. It encourages the world's brightest business minds to compete in teams to solve grave issues faced by billions of people with innovative ideas for sustainable start-up enterprises. It is the world's largest student movement for social good, attracting 20,000 applicants per year.

About the Clinton Global Initiative

Established in 2005 by Former U.S. President Bill Clinton, the Clinton Global Initiative (CGI), an initiative of the Clinton Foundation, convenes global leaders to create and implement innovative solutions to the world's most pressing challenges. CGI Annual Meetings have brought together 190 sitting and former heads of state, more than 20 Nobel Prize laureates, and hundreds of leading CEOs, heads of foundations and NGOs, major philanthropists, and members of the media. To date, members of the CGI community have made more than 3,400 commitments which have improved the lives of over 430 million people in more than 180 countries.