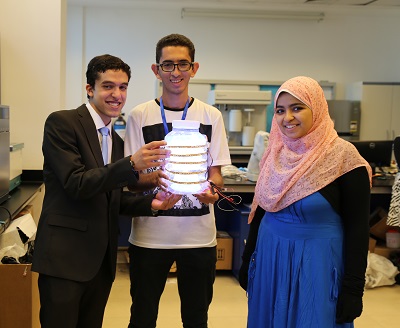 “We've always been fascinated by science because it helps us explore the world,” said Elsayed. He further explained that he and his colleagues liked microbiology, specifically, for they see it as the secret behind how every microorganism adapts to the frequent changes in its environment. “The fact that these tiny creatures have a terrific impact on our lives is what makes microbiology a great field of science.” Elsayed added, explaining the drive behind their project.

The team participated in the competition with a project titled: “A Photosynthetic Bio-Reactor that Produces Bio-fuel from Carbon Dioxide.” From its name, the project introduced a homemade bio-reactor that can convert carbon dioxide (CO2) into Oxygen (O2) and bio-fuel. Thus, it will have a significant role combating the growing global warming effect and reducing the usage of fossil fuels by replacing them with bio-fuels; which in turn could be a new solution for the world’s energy crisis.

Out of thousands of submitted entries, this team’s project represents the only project from the Middle East region and the second one from Africa to reach this stage of the competition.

Google Science Fair is one of the largest online science fair competitions in the world, offering students aging from 13 to18 years the opportunity to pursue their interest and passion in science and technology.