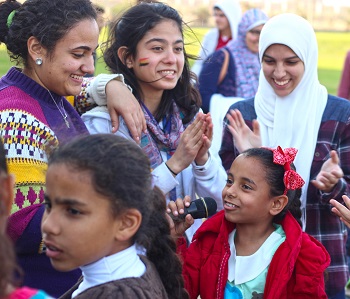 In their attempt to give back to the community on Egypt’s national Orphans Day , Zewail City students organized a fun day for a group of young orphans, on Sunday, April 3, 2016. Our students hosted 13 orphans, between the ages of three and ten, from Eibaad Alber Alraheem Orphanage in 6th of October City.

“We wanted to have a hand in putting a smile on an orphan’s face,” said Mohamed Essam, materials science undergraduate at Zewail City, explaining the motive behind the celebration. He added “It is our responsibility, as members of this community, to let orphans know that they are not alone.”

The event, which was held at Zewail City’s Sheikh Zayed campus, included various activities and games throughout the day such as musical chairs, group singing, balloon games, and a puppet show. At the end of the day, every child was given a special gift.

Few days before the event, our students initiated a fundraising campaign on campus, and donated the whole amount to Elhana Charity Organization.

“There is a tight relationship between what we learn at the university and doing charity work; it is all related to how we can benefit our community,” stated Essam.

Currently, there are three student clubs concerned with charity work and community service at the University of Science and Technology. The main aim of these clubs is to engage students in public outreach and community service initiatives that deepen their sense of responsibility toward the society at large.

Established in 2004, Egypt’s Orphans Day is a tradition set to raise more awareness of orphans’ needs and to relief part of the stress they face on daily basis.