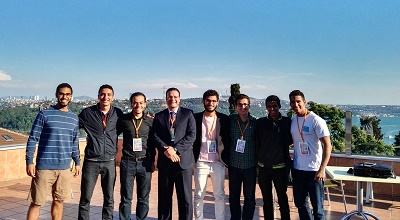 Three teams from Zewail City of Science and Technology took home the first and second place in the 22nd International Cultural and Academic Meeting of Engineering Students (ICAMES) competition, held at Turkey from May 5 to 11, 2016.

Prof. Ibrahim El-Sherbiny, director of nano and materials science programs and the teams’ supervisor, stated that the teams surprised the judges with their projects and their young age.
“Winning this competition proves the importance of research-based education in the development of any educational system,” said El-Sherbiny. “This is why we encourage our students to get involved in research activities as part of their studies,” he added.

The first team participated with a project on Parabolic Trough System, one of the most commonly used concentrated solar power (CSP) systems. In their project, the team used newly developed nanomaterials to enhance the system’s thermal conductivity and enable a self-cleaning feature for its mirrors.

“The minor modifications we did to the system’s original design enabled us to improve the overall efficiency of the system and produce more electricity,” said Hazem El-Tawab, one of the team members.

The team’s project focuses on the efficient usage of concentrated solar power for both water desalination and electricity generation. Mansour explained that the current design of concentrated solar power units involves mirrors, which have proven to lose their efficiency by time and cost a lot of money to be cleaned. “Through replacing those mirrors with Fresnel lenses, we managed to reduce the cost and generate more electricity,” he added.

The team also used newly designed heaters and condensers made from novel nanomaterials in their design.

The third winning project in the competition is based on the idea of utilizing the bacteria found in wastewater to clean it and produce enough energy to desalinate seawater at the same time.

“Through this integrated approach we managed to reduce the cost and energy needed for the water treatment and water desalination processes. This is mainly because both processes are happening simultaneously at the same unit,” explained Islam Genina, one of the team members.

ICAMES is a world-wide engineering project competition organized by the Engineering Society of Bogazici University in Istanbul. The one-week-long competition hosts 100 students from 20+ different countries annually. This year, Zewail City students were the only participants from the MENA region.