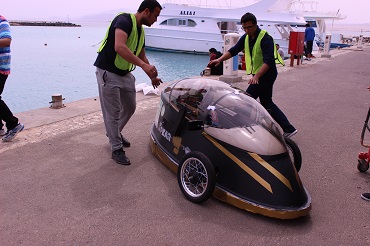 GHEC-E is an international collegiate competition for electric vehicles, encouraging innovation and the creation of new ideas to maintain the environment and to support the diversity of alternative energy sources.

Our students managed to secure the best technical innovation award-- for their vehicle optimization system using LabVIEW-- in addition to the best presentation award, and the best video award.

“The competition was more of a brain game than a race. We had to figure out the right equation needed to optimize the vehicle’s function, for each stage of the race, in the most energy efficient manner,” said Ahmed Samir, mechanical sub-team member.

Our students competed against nine other teams representing local universities from all over Egypt. Each team was provided a kit to design an energy efficient, three-wheeled vehicle that they tested in a two-day race.

The race was split into two stages. The first stage entailed teams to drive their vehicles as far as possible in one hour, using only the energy stored in their batteries. During the second stage, teams combined oil and electric power to make their vehicles travel the maximum distance on the least amount of energy in three hours. The overall winning team is determined by the combined results of the two stages.