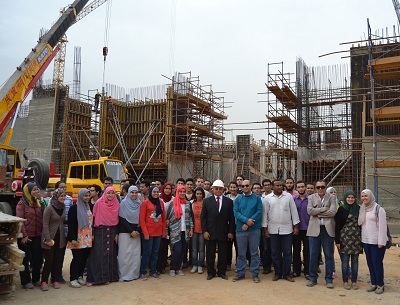 “It was a great opportunity for us to keep track of what’s going on the new campus,” said Ahmad El-Brollosy, student union vice president. He explained that there have been tremendous changes on-site since his last visit to the new campus in March 2015.

“What impressed me the most was how fast the work on the soil replacement process was done,” added El-Brollosy.

During the five-hour visit, Salah Azzazi, director of governmental affairs, gave the students a presentation about the status of the first phase of the construction plan. He then accompanied them in a tour to showcase and explain the work that has been done on first phase buildings such as the Helmy Institute for Medical Sciences (HIMS), the Center for Nanotechnology (CNT), the students’ dorms, and the university building, among three other.

To give the chance for more students to witness the transformation of the new campus, the Student Affairs Office is organizing another visit on November 11, 2015.

A team of prominent architects are working — under direct supervision of the Chairman of the Board — on creating a campus that would achieve the City’s vision and mission within a structure that unifies the five essential components Zewail City needs.

Zewail City’s new campus is spacious, technologically innovative, and environmentally sensitive. With new and developed facilities, the City will have a progressive campus, offering state-of-the-art resources to students and faculty, which will further enhance Zewail City’s reputation as one of the primary academic institutions.